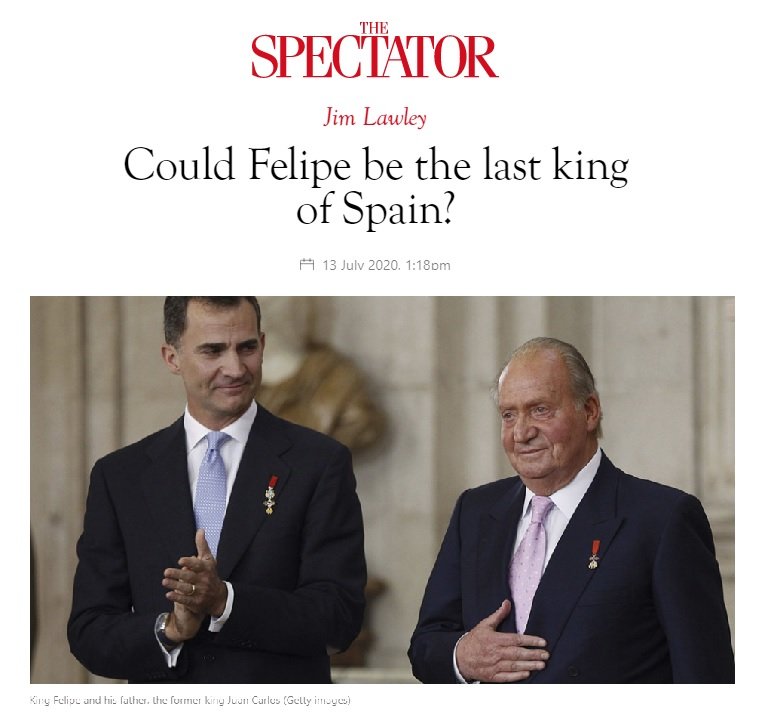 (Traduciónen google). With a huge Covid-induced economic crisis looming, many Spaniards are wondering if, through no fault of their own, they are about to lose their jobs. Among them is King Felipe VI.

It’s not that Felipe has done much wrong in his brief reign. Indeed in many ways he has been that historical rarity – a Spanish Bourbon who takes his duties seriously. But there’s a chance that he might soon become the innocent victim of the dynasty’s many shortcomings, and in particular the declining reputation of his father.

Felipe came to the throne in 2014 when his father, Juan Carlos I, worried about his growing unpopularity, abdicated. In 2012, an embarrassing photo emerged of Juan Carlos on safari in Botswana standing in triumph over a dead elephant, despite being a leading figure in the World Wildlife Fund. That expensive, politically-incorrect holiday came at a time of economic crisis when many Spaniards were living in poverty and food banks were working overtime. The monarchy was further damaged by the trial of Juan Carlos’ younger daughter Princess Cristina and her husband on tax fraud charges; Cristina was cleared but her husband is now serving a lengthy prison sentence.

Just when it seemed Felipe might be salvaging the monarchy’s reputation, his father’s legacy has come back to haunt him. Spaniards bracing themselves for another economic crisis have been incensed to learn that Juan Carlos is now being investigated over alleged payments into offshore accounts and a gift, reportedly of £51m (65 million dollars), to a woman who accompanied him on that unfortunate safari.

People are understandably angry. When Felipe made a televised address in March intended to unite a nation in the grip of the pandemic, it instead triggered protests as his subjects appeared on their balconies for ‘una cacerolada’ (a great banging of saucepans) demanding that his father donate his allegedly ill-gotten gains to the public health care system.

Since then a senior member of the staunchly republican Podemos party, junior partners in Spain’s coalition government, has called for a referendum on the future of the monarchy. Prime Minister Pedro Sánchez, however, while agreeing that the revelations about the ex-king are ‘disturbing’ has been quick to point out that Felipe is not responsible for his father’s actions and that the monarchy is a cornerstone of the Spanish constitution. The other major national political parties have also made clear that they support the monarchy.

The worry, however, is that in the autumn when the economic crisis starts to bite, popular demand for a referendum might become irresistible and the vote could easily go against the monarchy. To put it bluntly: if hundreds of thousands of Spaniards lose their jobs it may prove difficult for Felipe to keep his.

The problem for Felipe is history. While the Spanish people may have few complaints to make of the present king, they have good reasons for believing that in general the monarchy has not served their country well. Precedents moreover exist: on two previous occasions monarchs have been forced into exile and a republic established.

Isabel II (1843-1868) was so lascivious that the Times declared that she was ‘guilty of high treason against the cause of virtue and morality’. The final straw came when she took the son of an Italian pastry cook as a lover; the army rose against her, calling for a ‘Spain with honour’ and Isabel fled to France.

Although Spain’s First Republic was short-lived, the shortcomings of Alfonso XIII (1902-1931), Isabel’s grandson, soon reminded the nation of the disadvantages of a bad monarch. Presiding over his first cabinet meeting at the age of 16, the spoilt youth announced himself by planting his feet on the table and declaring that henceforth he alone had the power to grant honours. Addicted to political intrigue and disastrous military adventures, Alfonso was finally forced into exile in 1931. Landing at Marseille he was disgusted to discover that the brothels had already closed for the night. Then Spain’s Second Republic led to the Civil War and Franco’s dictatorship. It wasn’t until the dictator’s death in 1975 that the monarchy was restored, after an interval of 44 years.

Given the history it’s not surprising then that republican sentiment in Spain is strong. There is little sentimentality about the monarchy and a strong sense, especially among the young, that it is an anachronistic institution which has no place in a twenty-first century democracy. ‘We’ve got rid of it before’, said one young Podemos official, ‘we can get rid of it again. After all, there was no monarchy for almost half of the twentieth century.’

The danger is real: the last economic crisis saw a surge in republican sentiment and Spain is predicted to be one of the countries that will now suffer most from the economic impact of the health crisis. Nevertheless it would be a shame if the monarchy were swept away in the wake of economic downturn: Felipe is no more to blame for Covid and its consequences than he is for the faults of his predecessors on the throne. There are signs moreover that given a chance he might in fact prove to be a good king for the straitened times ahead; he’s already removed his father’s annual stipend of £180,000 (200,000 euros), renounced his own inheritance and shown welcome concern for the poor. If nothing else, the monarchy provides a valuable sense of historical continuity, and in the past getting rid of it hasn’t solved many problems.

But Spanish monarchs tend not to last the distance; of the previous five, only one, Alfonso XII, died while on the throne. If at some point a Third Republic is declared it is difficult to imagine the Bourbon dynasty ever being restored again. Felipe could be the last King of Spain.